Women at the top of the pyramid

It is undisputable that gender parity results in economic benefits for companies. However, despite firms investing considerable efforts in gender diversity initiatives, they still struggle to reach equality. The causes aren’t always clear, but can include corporate culture occupational segregation, failure to ensure fair career progression, lack of policies and lack of a balanced recruitment strategy. Consulting firms are no exception. Arthur D. Little (ADL) UK has implemented a set of initiatives to close the gender gap and adopted an operating model that promotes work-life balance and supports women throughout their consulting careers.

Gender diversity is about fair representation of genders in the workplace. It can be measured in many ways but, most commonly, it is related to the ratio of men to women or the wage gap between the two genders.

Gender equality is a moral obligation and a fundamental right in many countries. For example, Article 23 of the Charter of Fundamental Rights of the European Union states, “Equality between men and women must be ensured in all areas, including employment, work and pay.” In the United States, the Civil Rights Act of 1964 (Title VII) enforces equal employment opportunities.

Aside from any moral drivers, gender diversity has proven to result in economic benefits for companies. It has impacted all major financial indicators, such as sales growth, return on equity, market value, EBIT margins and employees’ productivity 1 .

Furthermore, a study conducted by MSCI 2 on the presence of female directors on companies’ management boards demonstrated that growth of average employee productivity was higher for companies employing three or more women at board level.

Credit Suisse 3 found that companies in which women represented over half of senior management had achieved higher sales growth (8 percent per annum on average) than the overall MSCI All Country World Index (ACWI) since 2008. The same study also showed that companies in which women represented half of senior managers could achieve 10 percent higher cash flow returns on investment.

Despite the clear economic benefits, why are companies still struggling to reach gender equality?

Given the potential economic benefit it can generate, one might expect that the gender gap would be closing rapidly. However, in 2017, the World Economic Forum estimated that it would still take 217 years to close the economic gender gap.

The most common challenges that companies face in reducing the gender gap are:

On average, the professional services industry has a higher share of women than many other industries. However, consulting firms are facing similar challenges in implementing gender diversity initiatives, and given the nature of the business, they struggle to provide good work-life balance. This results in relatively fewer women at higher levels of the pyramid. In fact, as employees progress in their careers and their family commitments increase, this results in high turnover of employees, especially women.

Generally, tier one consulting firms have turnover rates of 20–25 percent annually, which ultimately lead to high recruitment and retention costs. To improve work-life balance and win the talent war, some consulting firms have adopted several measures, such as part-time, unpaid leave, working on internal activities, and balancing stressful projects with less-intense activities. Companies are also offering dedicated training and mentorship programs for women returning from career gaps that were initiated by such family commitments, as well as a range of other issues.

For example, Bain & Company established a Global Women’s Leadership Council in order to be at the forefront of gender diversity. McKinsey & Company offers women-specific training programs for each level. Through its Apprenticeship in Action program, the Boston Consulting Group identified a set of themes to improve employees’ satisfaction.

With meritocracy as a core value, gender diversity is also a top priority for Arthur D. Little. In order to attract the best talent, a culture that embraces diversity at every stage and level of the organization is essential.

Following a benchmark against UK competitors, the ADL UK offices have designed a program dedicated to improving gender diversity as part of a global effort to address this issue. The approach was inspired by ADL markets which were leaders in gender diversity (Sweden and Japan), but included some UK-specific components.

To apply best practice in terms of gender diversity, ADL UK has established a dedicated committee, made of ADL UK employees representing all levels, and with a balanced male-to-female ratio. It is responsible for the development and the execution of the gender diversity action plan.

Our Gender Diversity program identifies a set of key initiatives across the employee journey that seek to address unconscious bias, promote flexible work options, and ensure equitable recruitment targets and development opportunities. The Partner group has provided the vision and approved the program.

The implementation of the plan was driven by the gender diversity committee, which regularly reported to the Partner group. The committee identified five key elements necessary to deliver the program:

Successful implementation of a gender diversity program is just the first step. Gender equality must be part of how the company operates and works every day. Building on existing flexibility, as well as emphasizing career progression in the workplace, enables ADL UK to continuously adapt and improve this operating model.

ADL recognizes that at certain points in a consultant’s career progression, the balance between work and family life changes. Therefore, the company has defined an operating model that supports employees in expressing their full potential at each level, while ensuring adequate work-life balance.

At business analyst and consultant level, ADL looks for highly motivated and fast-learning talents. Passion to solve problems and willingness to always go the extra mile are key to success.

As junior consultants progress in their careers and gain experience, ADL values their knowledge and provides differentiated career paths to accommodate the individual’s private and professional needs. For example, the “expert path” allows our consultants to make their experience available to the Arthur D. Little network as well as fulfill family commitments. In addition to dedicated career paths, ADL offers flexible ways of working, such as working from home, taking a career break or working part-time. 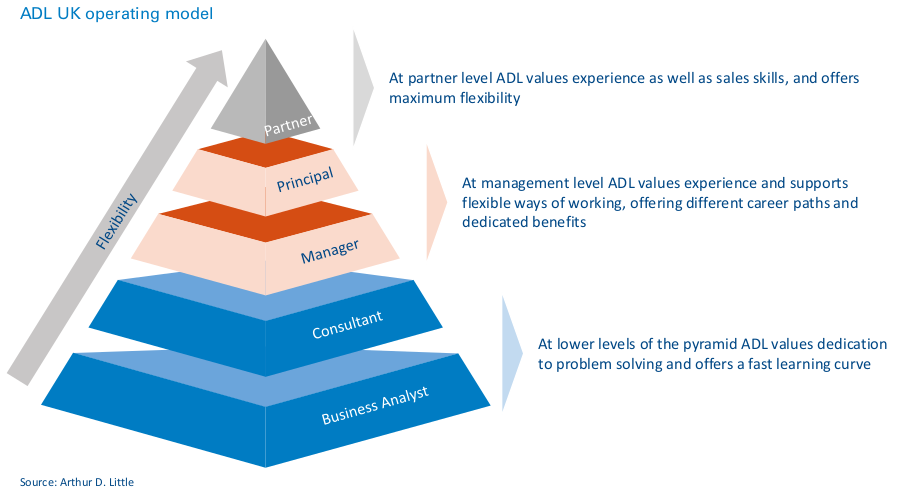 What did we learn on our gender diversity journey?

Top management commitment: It started from the top: the managing partner of the ADL UK office, together with a senior partner in the London office, took the initiative to kick off the Gender Diversity program. Strong leadership commitment was instrumental in the success of both the strategy and implementation phases. Ongoing emphasis on gender diversity from the Partner group as new challenges arise will be crucial to maintaining the momentum of the initiative.

Balance local needs with a global framework: Despite being part of a global organization, each ADL office has specific needs and is subject to local regulations in terms of benefits versus welfare. Therefore, a key challenge was to ensure that local needs were met, while remaining compliant with the global ADL framework.

Employee branding: Our own senior female employees are brand ambassadors to recruit both junior and senior female candidates. Generally, it is harder to attract women for senior roles as they are less inclined to leave their current jobs and more difficult to reach. Therefore, this is an area that requires a number of new initiatives, not least of which is advertising ADL as a company that can provide the flexibility that women may require.

The importance of internal communication: In reviewing the ADL policies and benchmarking them against our competitors, we discovered that many actions were already in place – just not effectively communicated to the employees. This has been addressed by creating a new networking group within the company and rolling out the initiative results themselves.

This report demonstrates how gender diversity is a priority across all industries, and companies can achieve significant benefits by reaching gender parity. Despite the efforts to implement gender diversity initiatives, companies are facing challenges. In particular, the consulting industry has been known for its long working hours and family-unfriendly attitudes. The struggle to ensure gender diversity at the top of the pyramid, and meet the stringent targets they have set, remains ever-present for many companies.

We are excited that Arthur D. Little has set gender diversity at the top of its agenda and put in place several measures to recruit, promote and retain female talents at all levels. However, the journey never ends, and the company constantly strives to offer the best to its employees. We will be tracking progress and the impact on our activities, and hope to report back positively in 2020.